The Welsh Pony and Cob is a group of four closely-related horse breeds including both pony and cob types, which originated in Wales in the United Kingdom.

Native ponies existed in Wales before 1600 BC, and a Welsh-type cob was known as early as the Middle Ages. They were influenced by the Arabian horse, and possibly also by the Thoroughbred and the Hackney horse. In 1901, the first stud book for the Welsh breeds was established in the United Kingdom, and in 1907 another registry was established in the United States. Interest in the breed declined during the Great Depression, but revived in the 1950s. Throughout their history, the Welsh breeds have had many uses, including as a cavalry horse, a pit pony, and as a working animal on farms.

Today, the modern Welsh Pony and Cob breeds are used for many equestrian competitive disciplines, including showing, jumping, and driving, as well as for pleasure riding, trekking and trail riding. The smaller types are popular children's ponies. 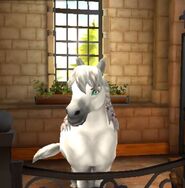 You can also buy Welsh Pony in the Market for about 5.000 coins.

Breeding with a Welsh Pony Edit

1. Wikipedia
Retrieved from "https://hhwa.fandom.com/wiki/Welsh_Pony?oldid=30908"
Community content is available under CC-BY-SA unless otherwise noted.