Developed from ponies taken to Iceland by Norse settlers in the 9th and 10th centuries, the breed is mentioned in literature and historical records throughout Icelandic history; the first reference to a named horse appears in the 12th century. Horses were venerated in Norse mythology, a custom brought to Iceland by the country's earliest settlers.

The only breed of horse in Iceland, they are also popular internationally, and sizable populations exist in Europe and North America. The breed is still used for traditional sheepherding work in its native country, as well as for leisure, showing, and racing. 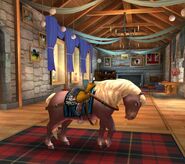 Breeding with an Icelandic Horse Edit

For people who have read this, I have another secret combination for you. Dartmoor pony and Connemara pony. It's cheaper to breed with your own horses. Thanks. So that's just a little tip. From Emily, a horse haven player/fan.

Retrieved from "https://hhwa.fandom.com/wiki/Icelandic?oldid=30877"
Community content is available under CC-BY-SA unless otherwise noted.