The Haflinger, also known as the Avelignese, is a breed of horse developed in Austria and northern Italy (namely Hafling in South Tyrol region) during the late 19th century. Haflinger horses are relatively small, are always chestnut with flaxen mane and tail, have distinctive gaits described as energetic but smooth, and are well-muscled yet elegant. The breed traces its ancestry to the Middle Ages; several theories for its origin exist. Haflingers, developed for use in mountainous terrain, are known for their hardiness. Their current conformation and appearance are the result of infusions of bloodlines from Arabian and various European breeds into the original native Tyrolean ponies.

Haflingers have many uses, including light draft, harness work, and various under-saddle disciplines such as endurance riding, dressage, equestrian vaulting, and therapeutic riding. They are also still used by the Austrian and German armies for work in rough terrain. 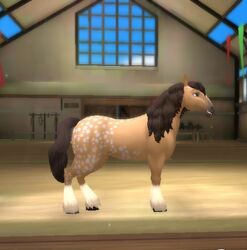 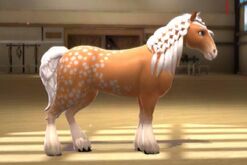 Breeding with a Haflinger Edit

When attempting to breed a mythic Halflinger, it may be very hard to get good results the first time. Keep trying!

Retrieved from "https://hhwa.fandom.com/wiki/Haflinger?oldid=30872"
Community content is available under CC-BY-SA unless otherwise noted.