The Gypsy Cob, also known as the Traditional Gypsy cob, Irish Cob, Gypsy Horse or Gypsy Vanner, is a type or breed of domestic horse from the island of Ireland. It is a small, solidly-built horse of cob conformation and is often, but not always, piebald or skewbald; it is particularly associated with the Irish Traveller and Romani travelling peoples of Britain and Ireland.

The breed was traditionally known as the Irish Cob. It was often referred to simply as a "Cob", although the term cob defines a short-legged, stout type of horse rather than a breed. Other names are used worldwide for the breed, such as Gypsy Cob, Gypsy Vanner and Tinker Cob, alluding to its association with the travelling community

Gypsy Cobs are shown and traded at traditional horse fairs, of which the Appleby Horse Fair is the largest in Europe. Many Travellers and Romani travel to the fair in traditional horse-drawn caravans and vardos. 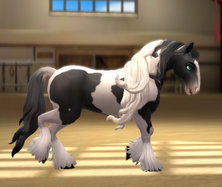 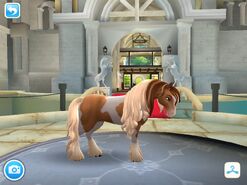 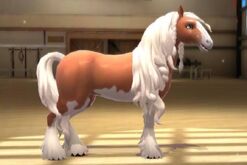 Breeding with a Gypsy Vanner Edit

Retrieved from "https://hhwa.fandom.com/wiki/Gypsy_Vanner?oldid=30889"
Community content is available under CC-BY-SA unless otherwise noted.