The Connemara Pony (Irish: Capaillín Chonamara) is a pony breed originating in Ireland. They are known for their athleticism, versatility and good disposition. The breed makes excellent show ponies.

The Connemara region in County Galway in western Ireland, where the breed first became recognised as a distinct type, is a very harsh landscape, thus giving rise to a pony breed of hardy, strong individuals. Some believe that the Connemara developed from Scandinavian ponies that the Vikings first brought to Ireland. Another source was likely the Irish Hobby, a now-extinct breed established prior to the 13th century. Legend, however, says that galleons from the Spanish Armada ran aground in 1588, and the Andalusians on board were set loose. The Spanish horses bred with the native stock, refining the local ponies. For additional strength and stamina, Arabian blood was added in the 18th century. They were also crossed with Hackneys and Thoroughbreds. Too much crossbreeding began to dilute the pony bloodlines, so the Connemara Pony Breeders' Society, worked to preserve the breed type.

The Connemara is best known today as a sports pony. Ridden by both children and adults, it is considered to be a very versatile pony breed, competitive in show jumping, dressage and eventing, but also with the stamina for endurance riding. They are also shown in harness. 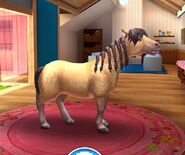 Breeding with a Connemara Pony Edit

Retrieved from "https://hhwa.fandom.com/wiki/Connemara_Pony?oldid=30910"
Community content is available under CC-BY-SA unless otherwise noted.