The Akhal-Teke (/ˌækəlˈtɛk/ or /ˌækəlˈtɛki/; from Turkmen Ahalteke, [axalˈteke]) is a Turkmen horse breed. They have a reputation for speed and endurance, intelligence, and a distinctive metallic sheen. The shiny coat of the breed led to their nickname, "Golden Horses". These horses are adapted to severe climatic conditions and are thought to be one of the oldest existing horse breeds. There are currently about 6,600 Akhal-Tekes in the world, mostly in Turkmenistan and Russia, although they are also found throughout Europe and North America. Akhal is the name of the line of oases along the north slope of the Kopet Dag mountains. It was inhabited by the Tekke tribe of Turkmens.

There are several theories regarding the original ancestry of the Akhal-Teke, one being that the ancestors of the breed may date back to animals living 3,000 years ago, known by a number of names, but most often as the Nisean horse. The precise ancestry is difficult to trace, however, because prior to about 1600 AD, horse breeds in the modern sense did not exist; rather, horses were identified by local strain or type.

The Akhal-Teke, due to its natural athleticism, can be a sport horse, good at dressage, show jumping, eventing, racing, and endurance riding. 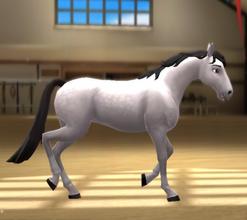 Breeding With An Akhal Teke Edit

Retrieved from "https://hhwa.fandom.com/wiki/Akhal_Teke?oldid=30893"
Community content is available under CC-BY-SA unless otherwise noted.